Your Study Menu! Dig in!

Guess what? I actually video recorded and documented much of my experiences in Korea.  However the best ESL Case Study I have ever documented was the time I was at Kwangnam Elementary 2007 School in Seoul 광남초등학교.  So let me tell it to you now, since I have finally found much of the old video footage that I created at that time.  Gather and listen to an amazing ESL story.

So the year was 2007 and we had just moved from Cheongju to Seoul and I was looking for a new job.  I got an offer from a public Elementary School, but wasn't sure if I would like it or not.  These were big classes with about 40 students.  The idea was to teach ESL with their native Korean teacher there for support.  Huge classes and shared leadership, I wasn't sure, but said, "Ok let's give it a try."

I walked in there with my guitar for the initial classroom introductions, but just before introducing myself as "James Purdie," I thought, why not try my funny Korean nickname, "James Bondaygee"?  After all, I already made a 'Bondaygee Song' and movie, so it would be easy to support my funny persona with these "creative credentials" to students and maybe get a few laughs out of it at the same time.

So I went for it.  "Hi there everybody.  It's nice to meet you.  My name is James Bondaygee, but you can call me Mr. Bondaygee."

The students' reaction was instant laughter and disbelief as they stared at me.  I knew I was getting a response and rapport,  so I said "Yeah, you wanna hear the "Bondaygee Song?"  So I pulled out my guitar and sang my little tune, "Bondaygee  Bondaygee!"  I guess at this point I kind of realized the power of my art and creativity in general. Although I always considered it a silly little song, the reaction by the students said something far deeper in their eyes.  They weren't just looking at me as teacher, but as some kind of ESL Superhero who had come to liberate their minds and revolutionize the whole ESL World!  If you're a person who grew up watching Bugs Bunny at all, this is the exact moment in which Bugs says..."Meehhh What's up Doc?" and everybody goes nuts with a happy hysteria.  I actually showed several episodes of Bugs Bunny that year.  We laughed hysterically ourselves.  That's the best kind of laughter.

Anyways, for the teaching, naturally I was supposed to follow the Korean Text book and create a lesson plan everyday.  However, after a few months, I thought to myself, maybe my students might enjoy some of my own educational music videos as a supplemental bonus.  After all, I had made so many already including the "Very Good Words Series" and many more basic ones.  What's funny about it all is, I was actually pretty intimidated at the idea of teaching such a huge group of students and Korean teachers too, but I observed something awesome:  larger groups had more "good energy."  In every single class, there were several "superstar" students that would shine and transmit like a spiritual energy to me and it would bounce back and forth like the way a laser works (that's how lasers work by the way.  Light bounces around in a little chamber getting stronger and stronger until it pops out the tiny hole as a powerful, concentrated light beam).

So as I started teaching my own educational videos along with the regular curriculum, I was happy to see that students were quite entertained and "into it".  I share some basic videos like my "Action Easy Verb Video," and then next I tried my "Very Good Words Series".  The response was far better than I expected. "Wow!" I thought, "We've got some real potential here!  These kids are thirsty for this kind of learning-musical ESL lessons."  I proceeded to test the Very Good Words again with the other classes.  I should state clearly that I had ten identical Grade 3 Korean Classes with 40 students in each and a respective, Korean teacher.  Interestingly each Korean teacher had their own unique style and atmosphere.  Sometimes this really promoted the spirit of learning, which I could always feel.  I became so close to some of the Korean teachers, with whom I often shared 'knowing smiles' of a mysterious, spiritual connection.

Anyhow, after "testing the waters" and realizing that the potential for great learning and growth was really there, I improvised a large scale system for the entire school grade and went for it, putting my heart and soul into this passionate endeavour.

I continued to teach the Korean textbook, but at the start of each class, I started with a Very Good Words Music Video. The school was very supportive.  They allowed me to print giant posters of my "Very Good Words" Word lists.  The posters were great because the students could see them at any time they wanted.  As they got familiar with the words,they would frequently browse, read and try the practice sentences below each word.  Next, we made a personal A4 Sized photo copy of each words list for all of the student in grade 3.  That makes roughly 400 students.  When we gave the word-list handouts, I always read them over one time with the students.  We always practiced the pronunciation one time, asked questions and discussed the students' favorite words. Sometimes I'd ask students to try and make sentence with any of the words.  That can be a fun game too.

So after we went over the list once, we would watch and listen to the Very Good Word Music Videos.  At first, it is best to read the word list while listening to the music video.  This helped the student memorize the words much faster.  In a very short time, students could easily remember every word and no longer needed the word lists.  And then they triumphantly sang out each word as it appeared on the big screen monitor.  The students seemed very empowered by the words and their growing new knowledge.  As we learned each Very Good Word Song (VGW1-VGW8), several students made their own booklet with the words carefully protected inside.  I was touched to see that.

The Next Level: Exponential Learning

Well it seemed like things were going so well, it was like a dream-come-true educational experience.  Could things get any better? The triumphant answer was yes! A few days later it occurred to me, why not make everything into a school wide ESL Competition using all ten grade 3 classes?  This is why it turned out to be such an amazing educational experiment, because we began with ten equal classes of 40 students.

The Korean teachers and I put it to the students: "Let's have a competition to see which class can memorize all the 'Very Good Words' first!"  The students went crazy with this idea and took to the task of memorizing all the words of each VGW Song with such a passion and fervor that we could only sit back in amazement at what we had started.  This was exponential learning.  This was profound.  This was like "spiritual ESL learning"!  Every class after that point forward was like a musical climb up Mount Everest.  I grew to love every single student at that time.  We all had the feeling of transcendence.  I dreamed at that time, I remember, of  being in the classroom and singing John Denver's "Rocky Mountain High Colorado!"

We were on such a roll at this time! To take it to another level again, higher still, we started to play a game of Very Good Words "Class Recitals/학생 발표", where students who claimed to have learned the entire word songs would come up in front of the class and sing out the words, usually very fast and nervous with their friends watching.  And I started to photograph and video tape some of these performances.  I will included below one of the funniest and coolest kids from that school.  He took a ruler and a textbook and taped them together like a guitar and he emulated me in the classroom.  This made me laugh so hard!  Check him out!  What a great student!  I also had this special T-Shirt made by one of my Korean artist friends which I gave to the first students to memorize Very Good Words#1-4.  Many students went right to VGW7.  VGW5 even has a 100 words!  That was a test to see if students could do it.  Yes they could! And so can you.

By the way, this is how I learned Korean.  First learn all these English/Korean word associations and then a Korean/English sentence for each one.  The word lists themselves were about ten years of teaching and writing down the most commonly used words, words that you kept teaching over and over again to each class.  Or words that you found yourself always using with your friends.

The rest of the story is sweet history in my memory, but I'm sure you can get the picture.  There were several times where I and the Korean teachers had to pinch ourselves and ask if we were really teaching or dreaming?  It was really special and unforgettable.  I hope to hear more from the students in the future, which is why I'm posting this information, this story, pictures and videos.  And if you ever happen to teach at that Kwangnam School in Seoul, ask if they remember the Legend of Bondaygee Teacher? 번데기 선생님.

Here's a video with the Grade 3 Class#9.  I'm doing the song with my guitar, but you can just as easily use the "Youtube" videos with the big screen class monitors!  Take it to the next level yourselves!  Be another superstar teacher or school! 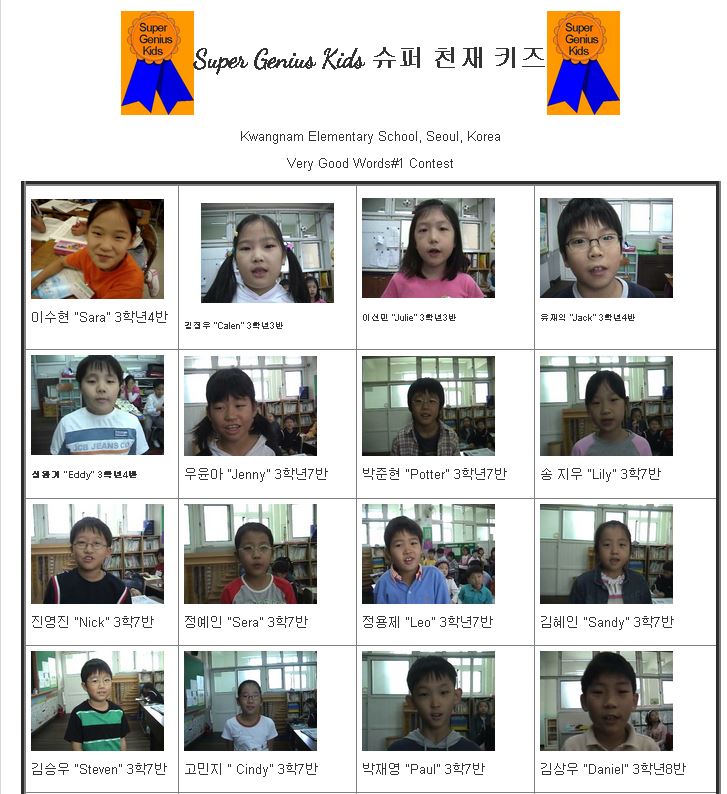 Please watch, study and learn the question: How do you feel?